A Trip For Mr. Richard Marks and ALS ONE

Joseph:
I woke up to the repetitive beeps of my watch and turned over in my sleeping bag. 4:55am it read. Today was Sunday. Stuffed from burritos consumed the previous evening, we crawled out of our tents to begin the 13 mile drive south to Katahdin Stream Campground, where the last leg of the Appalachian Trail, known as the Hunt Trail, ascends Mount Katahdin. “You are now entering Maine’s largest wilderness,” read a sign as we wrote our names down in the hikers’ log book. Brandon Whelan, Tyler Donovan, Philip Marks, and I, Joseph Wong, began our 5.2 mile ascent to the summit of Mount Katahdin.

Of course on our way up we were passed by several hikers including children half our age and some other characters wearing sandals of all things. I think we all scratched our heads at this one. After roughly three miles of meandering through the forest, we ascended above the treeline and were soon scrambling up sheer rock, squeezing through spaces no more than two feet wide.

Soon the trail got steeper, the wind got stronger, and the fog got denser. But the trail kept going on and on. On either side of the trail was a deep abyss of fog hundreds of feet deep. We had no idea how far we had traveled, nor how much we had left. Finally, the Hunt Trail converged with the Abol Trail and the landscape flattened out; it became mossy and gradual with algae-covered boulders. Countless times we believed the summit was in view but were all dumbfounded when the fog revealed just another ridgeline. Finally, we saw a gathering of hikers and a prominent wooden sign emerge from the fog ahead of us. Philip led the way for the last 25 yards and we nearly started running in excitement. After four arduous hours of hiking, the words “Northern Terminus of the Appalachian Trail” provided an unfathomable amount of humble triumph.

We proceeded to take our pictures and even scraped a bit of LTE out of our iPhones.  Holding onto our hats, we savored the moment 5,267 feet up in the clouds.

I must now mention how on Saturday, Mrs. Marks told us how Philip had wanted to hike the Knife Edge Trail on the descent. Hearing this, Brandon, Tyler and I were like “oh boy let’s go!” excited that he shared our desire. I’ll now turn the story over to Tyler where he will explain how that excitement converted into some twisted mixture of fear and regret.

Tyler:
After momentously summiting Katahdin in honor of Mr. Marks we poked around the exposed peak looking for a place to nestle for lunch. We found a large rock that blocked the wind, enabling Joseph to cook the beef stroganoff he had been raving about. We refueled and prepared for our descent down the mountain. After hearing all the stories of how the Knife Edge Trail is a once-in-a-lifetime experience, we had our minds set on this route. We also heard the stories of some of the 63 people who never got to complete their trek across the ridge. Turning to each other we said “we’re here and we for sure aren’t turning back now.” We started our hike into what seemed to be light fog which persisted for about a quarter of the way through.

Then Mother Nature decided to let loose. The fog densely thickened and we could only see about 30 feet in front of us. The clouds we were travelling through pelted us with a cold, unforgiving rain that fogged my glasses and heightened this experience. The winds were gusting well over 40 mph and blowing us over, especially when we reached another peak in the ridge. I wouldn’t exactly call this a hike, but instead a climb, as our grip rapidly wore away with each grasp of the rock in front of us. The ridge went up then down then up then down at least seven times. At this point we once again had no idea of our progress on this seemingly short 1.1 mile trail. Looking down on my left or my right was nothing but a straight drop that descended at least 2000 feet. 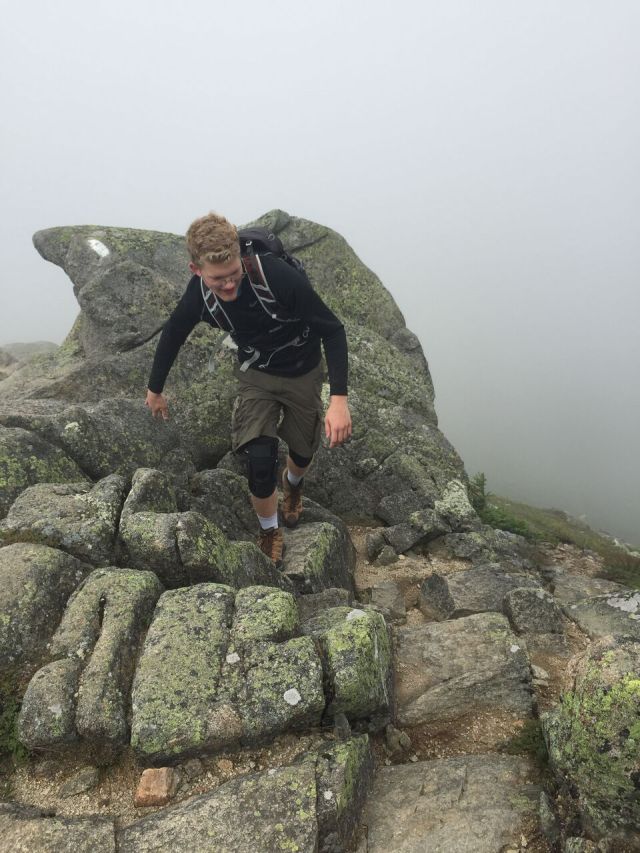 I think we could all agree this was the scariest experience of our lives thus far. We all held onto the rocks and half-heartedly bickered as the conditions continued to deteriorate. “Never again,” we kept saying to each other. The two women behind us turned back roughly halfway through as a summit-bound hiker explained to them that the trail gets no better. Even the group in front of us began muttering swears at a rapid rate. As many of you can probably imagine, here were four supposedly fearless boys hiking across the ridge because it was indeed just stupid scary. The group ahead of us was led by what seemed to be an experienced hiker so we linked up and continued to crawl across the rock. The trail was constant up and down, climbing then crawling then holding on for dear life as a gust attempted to blow you off the ridge. Finally, we reached the crevasse Mrs. Marks had told us about and knew we were close to the end of this section.

Sliding down on our backs and straddling the boulders we descended down the worst section triumphantly. We completed this crazy task and we have all agreed never to do it again.

My family has this motto that we live by when given certain situations; it’s “sleep when you’re dead.” (Tyler). Tyler said this a lot on the trails and it sounded ridiculous at some points and totally agreeable at others. I will now hand over the remainder of our journey to Brandon.

Brandon:
As we reached the end of the Knife Edge, I remember a great feeling of relief. We had done (what I thought at the time) the longest part of the journey. Before we even began, Mrs. Marks had told us how, on our way down from the knife’s edge, we would end up going down the Helon-Taylor Trail and how the trail was a “very nice trail” and “not hard at all.” Well, I now know that after hiking for some 7 straight hours, any trail becomes hard. As we made our descent from the final peak of the knife’s edge, we could see the end of our trail. It looked great, sunny, not very windy, and a wonderful view of rainbows, lakes, and green for miles and miles.

But as we hiked on, we realized the trail was not as short as we thought. It also got very windy on the way down. So windy, in fact, that my hat flew right off my head, leaving Joseph to descend 50-70 feet to retrieve it. We stopped for a short while to call our families, I called my mom (who of course didn’t answer her phone) and my grandmother, who was extremely pleased that we made it, and that everyone loved her brownies. Tyler called his house phone. No one answered. This led to three of the worst voice-mails any of us had ever heard. It took us around an hour to get to the tree line, and another hour to get to a sign that read “Helon-Taylor, Trail End: .1 miles.” We practically ran to the end of the trail where we found Mr. and Mrs. Marks waiting to congratulate us at the Roaring Brook campground. 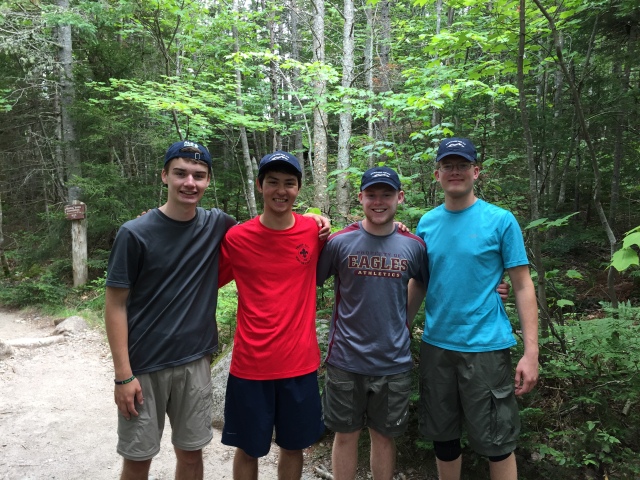 We took pictures and squished in the back of Mrs. Marks’ Jeep to return to the campsite. It is important to mention that on the ride back to the campground, I fell asleep in the car. Behind Joseph. Forcing him to sit in a very uncomfortable position. But that’s what friends do for each other.

Me, Ty, and Joe have been really good friends for years. And I’m glad to say we made another really good friend in Phil. I don’t think we would do that hike again if we had a choice, but I’m also really glad we got to do this for Mr. Marks, who has been such an inspiration to so many. I don’t think we would have made it up and down that mountain without thinking about him.