As mentioned yesterday, we had a great finale at Baxter State Park this weekend.

For the climb of Mt. Katahdin, our group of eighteen divided into three smaller groups. Tonight’s blog is from Joan Swift, neighbor to the Marks family and fellow scout parent, recounting the experience of one of these groups.

From Joan: Early in the morning on Saturday, August 5, a small convoy of scouts from Troop 507 in Winchester set out for Baxter State Park. This group also included Eileen and Rick’s friends Tom Simard and Brian Spies who, in true scout spirit, offered to drive some scouts and camping gear. The convoy eked its way north, stopping for a quick lunch to break up the 6+ hour ride. We arrived mid-afternoon under sunny skies to find Rick, Eileen and Philip setting up a tent in the camping area. Quickly, we all joined in and our campsite on Nesowadnehunk Field Campground would do a scouter mom or dad proud. Tyler, Brandon, Joseph and Philip went off for a swim in nearby Ledge Falls while the rest of us went to ‘stretch our legs’ on the Wassataquoik Lake Trail close to the campsite. We fell into an easy camaraderie from the start as we all were here to support Rick and his hike for ALS. The forest in Baxter State Park is so thick and dense, we were questioning how the deer and moose could make their way through (unfortunately, this was not brought on by a moose sighting).

As we regrouped, the scouts took charge, lit a fire and prepared one amazing hot taco dinner — courtesy of and kudos to Brandon and Tyler’s mothers, Colleen and Laurie. A few raindrops trickled in as the marshmallows and brownies (thank you Brandon’s grandmother!) were enjoyed. Max, Jerry and Eric arrived just in time for dinner and to set up for the night — a night filled with pouring rain, thunder and lightning. Fortunately most of us were able to tuck in just before the skies opened up. Most of us except Jasper, James, Katrina and Jason, who arrived amidst the downpour and quickly tucked away in a nearby lean-to.

On Sunday morning at 5:30 a.m. (yawn), the entire group including Rick and Eileen once again convoyed, this time to the Katahdin Stream parking lot for the ascent of Mt. Katahdin. We grabbed a group picture and took off on our paths.

The majority of the group headed up the Hunt Trail (the final leg of the AT!) to the summit, while my husband Tim, son Matthew and I made our way with Rick and Eileen about a mile up the Hunt Trail to Katahdin Falls. Rick’s hiking skills were evident as he managed to tackle the rocky climb, the wet rocks and the sandy trail. Along the way, we enjoyed some tricky ascents, lots of waterfalls, Indian pipe and the fresh smell of Christmas trees. We were passed by three thru-hikers — Shortcut, Little Bear Stumbles, and Soulflower — who had met Rick on an earlier part of the AT.  Most of all, we were able to spend quality time as family and friends to support each other and the fight against ALS. 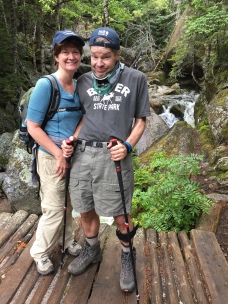 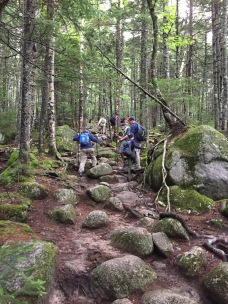 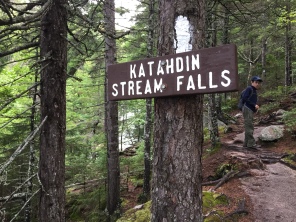 Finally, I am eager to hear about the journey to the summit and the infamous Knife Edge from the others.  (Part II – The Summit, tomorrow)