I spent the last two days hiking with Marty Mahoney and Dave Miranda. We met years ago on the soccer field when our boys were starting out in sandlot; hard to believe these same three boys just graduated high school! I want to thank my friends Marty and Dave for hiking with me in the Mahoosuc Range of Maine, which The Appalachian Trail Guide to Maine describes as “some of the most difficult hiking anywhere on the A.T.” We stitched together a few sections (see Wombat’s blog on Day 34 for an explanation of “stitching”) over two rigorous days.

Day 1
We left Winchester Monday night and stayed at a hotel in NH so we could get an early start Tuesday morning. And an early start it was! Steady’s alarm went off at 5:30 am and he was showered and dressed before 6. We stopped at Dunkin’s for some breakfast and caffeine and then we hit the road. 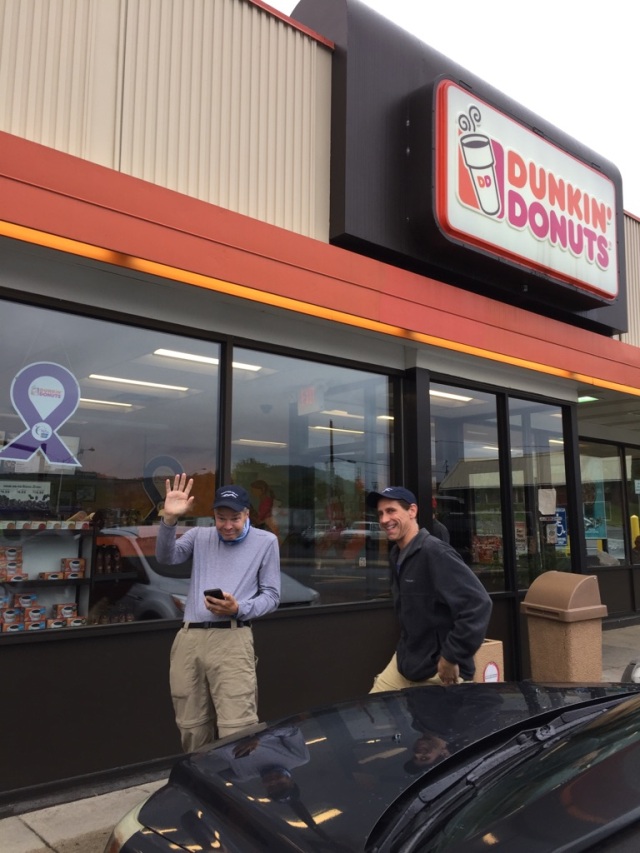 We parked on a logging road and decided we were going to go up the Carlo Col trail. To get to the trail you have to walk along the logging road for a little bit. After about 10 minutes on the road Steady began to get nervous.

He asked Marty twice if we were on the right track, since we were on a road not a trail. Finally we came to the trailhead. Steady was relieved.

We got on the trail and all was good. I don’t know if it is proper etiquette for me to come up with a trail name, but I have one for Marty. It is Speedy. He was always 10 steps ahead of us. He was trying to find the best path for Steady, although I don’t think there were many options. He also tried to help by making sure the path was clear of loose sticks and rocks. He tried to “help” by putting this round and pointed rock in a stream we were crossing for Steady to use. It turned out to be so wobbly that Steady nearly fell in the stream when he stepped on it. 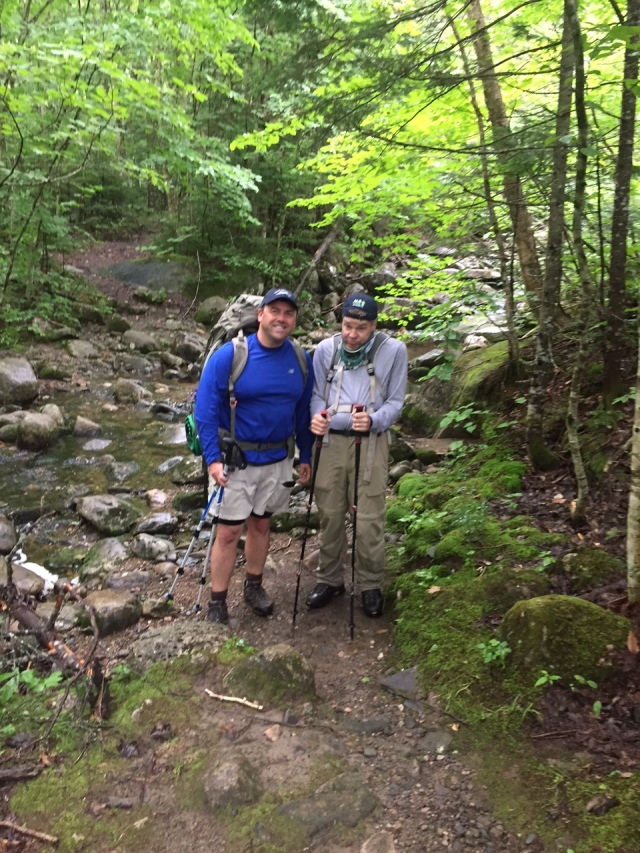 So of course I had to make that the running joke of the day, warning Steady not to step on anything Speedy “helped” set up. I think Steady laughed.

We proceeded to hike 2.4 miles to the Carlo Col shelter. 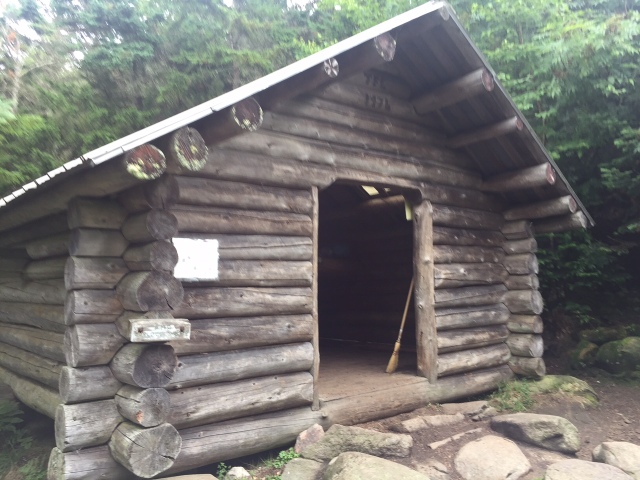 By the time we arrived, it was lunch time. Eileen had sent us with some subs, so we relaxed a little and enjoyed them.

After finishing lunch, we decided to head north on the AT toward Goose Eye mountain. We hiked for over an hour, but the trail became very steep and challenging. Steady was up for the challenge, but we got nervous about the trip down. We decided to change course and head south instead to the NH border.

After hiking another hour, we found the trail was even more challenging. You actually had to scale up some rocks to continue. 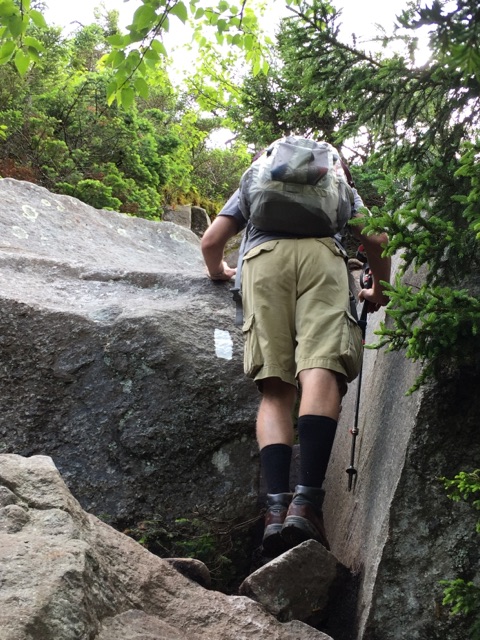 While Steady was up for the challenge, we decided against it. Since there was no place here left to hike, we had to come up with a plan b. Even though Steady had some yummy dehydrated goodies for supper, we decided we would leave the shelter.

We decided we would go to another hotel and start some place else first thing in the morning. So we hiked back to the car and went out to eat. We all ordered a beer and celebrated that Steady had passed the 100 mile mark today!!! Congratulations!!

Day 2
For day 2 we decided to head to Grafton Notch State Park. The three of us were ready for another day of hiking.

The parking lot was right on the AT, so we could start the hike immediately. We went on Old Speck trail towards the the top of Old Speck Mountain.

The weather was gorgeous and so was the trail. We passed a small waterfall.

The trail was easier than yesterday but still very challenging. There was a lot of difficult terrain including a few big steps.

Of course, no step was too big for Steady. He is hiking for his cause and no trail is going to stop him. 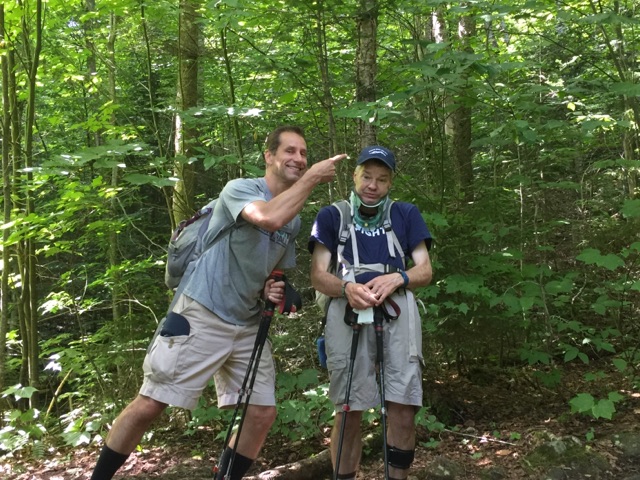 After several hours of hiking, we decided to stop for lunch. Speedy and I had talked about getting some subs in the morning to carry for lunch. Steady would have no part of it. He had brought some Ramen noodles and he was going to make those for us. I think he wanted to show off his camping skills. 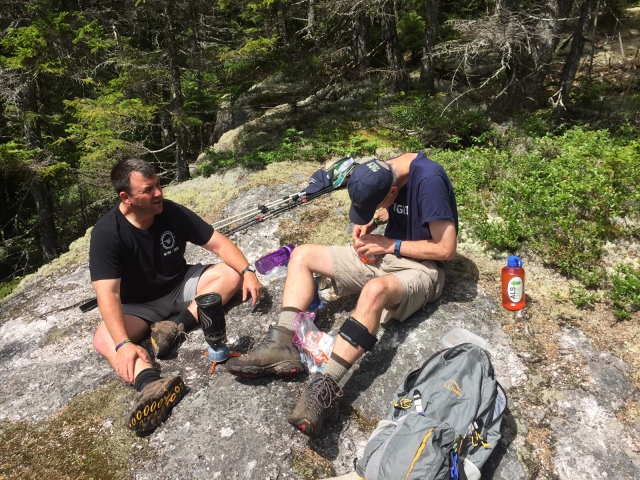 After a couple of more hours hiking up we decided we needed to turn around so we could make it back to the car before dark. I am so happy I was able to be part of Rick’s hike for ALS. If you have a chance, be sure to take it!! A great time was had by all!!! 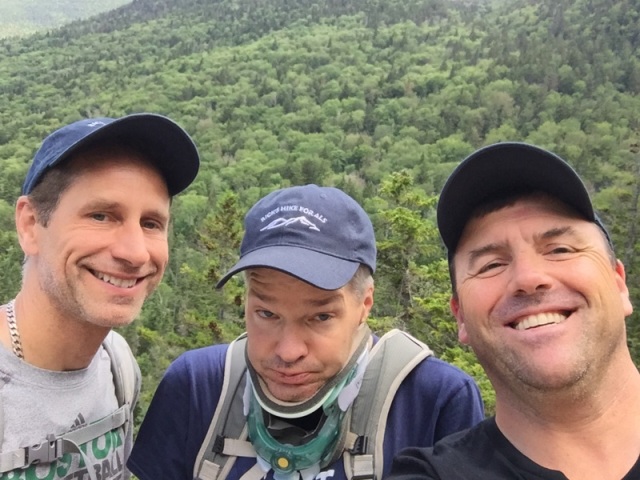