Tonight’s blog, the final one in the Katahdin series, is by Tom Simard on behalf of the group of nine who summitted Mt. Katahdin then returned via the Abol Trail.

The Ascent
Our hike up the 5.2 mile Hunt Trail on fabled Mt. Katahdin began around 6:30am from the Katahdin Stream Campground. After taking the requisite “before” group photo, our team of 9, which included Karina, Jason, James, Jasper, Brian, Jerry, Max, Eric, and Tom signed in at the trailhead as “ALS ONE.” We quickly covered the first mile of the ascent to the beautiful Katahdin falls where we stopped for the first of many rests on the way up. From there, the trail steepened considerably and we made our way methodically up to the treeline in beautifully cool but comfortable summer hiking weather.

By the time we reached the ridgeline above the trees where only a few hardy plants could grow, the trail turned skyward, and hiking turned into rock climbing. The scrambling was strenuous, though aided by helpful hardware drilled into the granite boulders with the famous white blazes painted on them. It did give our legs time to recover a bit as we were now scaling with the use of our hands, arms, hips – really anything we could use to hoist ourselves up the spur. Almost suddenly, early winter arrived … sideways. Each of us dug into our packs and donned whatever warm items of clothing we’d brought “just in case.” 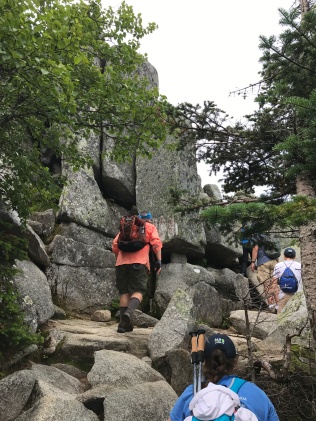 Penobscot legend says that the storm God “Pamola” was believed to be the protector of the mountain and reputedly inflicted punishment upon those who dared to summit from below. It certainly felt like someone or something didn’t want us there as the clouds moved furiously across our path as if in a rush to get to the Atlantic Ocean. After an eternity on the rocks, we finally reached the mysterious tablelands section of the trail which in the cloudy mist resembled a Lord of the Rings film set. With only a mile left to go from the Thoreau Spring, we continued on. The telltale signs of the summit reached our ears first as the voices of those who passed us on the way became audible just before we caught sight of the famous Katahdin sign as it appeared through the foggy cold air. We made it! We only stayed long enough on the exposed peak to eat a quick lunch and take the group photo in front of the sign marking the northern terminus of the Appalachian Trail. 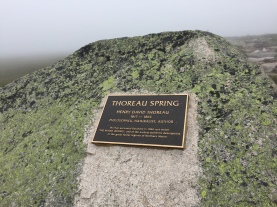 The Descent
Earlier on our hike, someone in our group had mentioned some local words to the effect that going up Katahdin is optional – coming down, however, is not. Realizing now that our journey was really just halfway through, and with the winds and cold rain pelting us from seemingly every direction we began our descent back down the Hunt Trail to the Thoreau Spring sign and junction with the Abol Trail and the Baxter Peak cutoff. It was at that point that we stopped to take a headcount and make a decision about whether to take the alternate Abol route down. That’s when we realized we should have taken a headcount at the summit. Max and Eric were not with us, and worry set in. As hikers passed us going up and coming down, we asked if they had seen the father and son team. Jerry and Karina selflessly volunteered to return the way we had come – up the mountain – with the hope of reconnecting with them and meeting up with the rest of us down the Abol Trail. The upper section of the Abol was steep and the going was slow, but our hiking team was now split in half so our best chance of reconnecting on the way down was to take it slowly and take breaks. And so we did. Still above the treeline, we waited along a new switchback section of the Abol Trail where a group of large granite boulders formed a makeshift wind shelter. Just a few minutes later, the team of Max, Eric, Karina and Jerry appeared on the ridgeline above us, and it wasn’t long before we were reunited again for the rest of the descent. 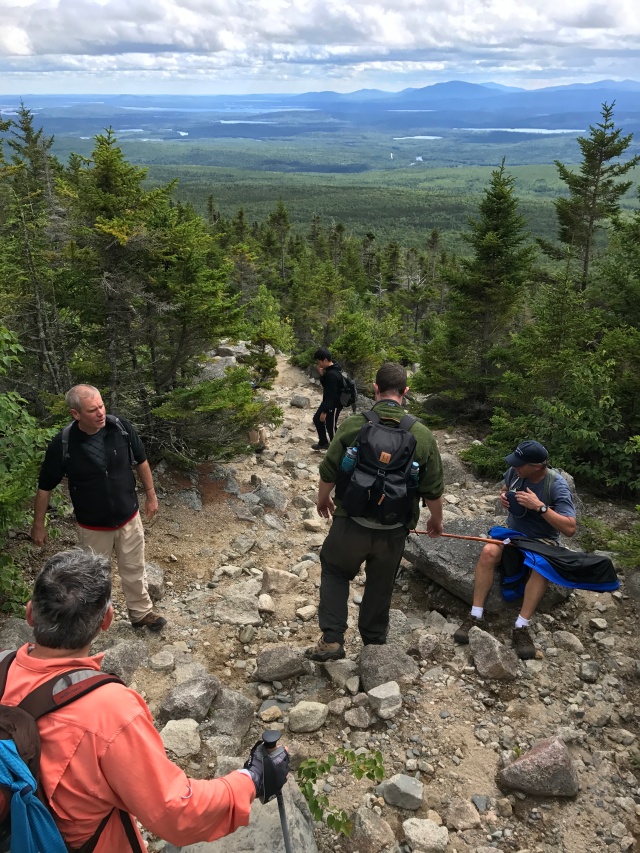 The new addition of the switchbacks lessened the impact on our tired knees somewhat, but we forged on single file with someone designated to lead in front and someone taking up the caboose. My iPhone’s compass app kept telling us how far we had to go. By the time we’d reached the trees, the temperatures returned to seasonal levels again and we stopped to stow our raingear and heavy wet clothes. The rest of the descent was relatively uneventful, though the spirited conversations that had become our norm were quieter now that we were all tired and yearning for signs of the Abol Campground. Jasper was the first to see a lean-to, indicating that we had made it! Yay! Then we remembered our cars were parked two miles up the unpaved road. The slog continued, but now on the Tote road with cars passing us in the opposite direction, so no chance to beg for a lift to our destination. Finally, we arrived back where we started, exhausted, relieved, accomplished. My iPhone told me we’d taken over 32,000 steps, though it felt like many more than that. As we were preparing to leave, Eileen, Rick and the Knife Edge boys arrived just in time for a group photo just as we’d done nearly twelve hours earlier.

Rick’s commitment to take on this challenge has inspired hundreds of people. His love of hiking and the outdoors, and his love for his family and his community have touched all of us in some way. For me, it brought back special memories of growing up in NH, hiking the Whites with my family, and camping in the shadows of the Presidential Range. This weekend it brought together erstwhile strangers, now friends, who are privileged to have been a part of this inspiring journey. Thank you, Rick, and God bless you.