Hey folks, Philip here (Steady’s son). Disclaimer: I apologize if this turns out to be long, I like to write…

Day 1
Four people set out at an absurd time Wednesday morning (6:00am) to reach our entry point of the Appalachian Trail near Millinocket, ME. My hero of a mother dropped my dad, Steve Bell, and me off at a point where the AT crosses a logging road (that’s why we bought a jeep!). On said logging road the four of us witnessed the first moose sighting of Dad’s hike! Before I begin my tale, though, I’d like to give a personal shoutout to Mr. Bell; he is one of just a few people who has hiked with my dad twice—he was on the scoutmaster trip—and he volunteered to hike again so I could have a chance to join my dad. What a legend.

We set off from Jo Mary Road around noon on Wednesday, aiming for Antlers Campsite 4.3 miles away. We stopped around a mile and a half in for a late lunch of Dag’s subs and then journeyed on. We were in the woods most of the day; however, we did pass by a nice view here:

The first half of our hike has got to be some of the nicest trail the AT has to offer. I nicknamed one small section “the cleanest ten yards of the AT.” If you’ve hiked before you’ll know that occasionally there will be boards that carry you over a muddy section. In the words of Mr. Bell, ours were like “a two-lane highway.” However, all good things must come to an end and eventually we reached the dreaded Mud Brook.

We shed our packs and worked together to get Dad across (I did actually help after snapping this picture). There were three separate crossings that had to be made so we were all quite winded by the third. The final 1.3 miles to our campsite were easily the longest of the day as my dad was slowing down. Our original plan was to stay on the trail for 3 days and 2 nights, but around this time Dad wrote “I want to be picked up tomorrow.” So it is written so it shall be done, father. We rolled into Antlers Campsite right at 5pm, ready to stretch our legs and meet some new faces by the fire. Alas, this was not to be the case as a massive group of youths had overrun the place. The nerve of these teenagers!

Slightly let down, we pitched our tents near the edge of the site. Careful rationing ensured I still had half my sub for dinner, while the real hikers tore into some dehydrated beef stroganoff. Satiated, we turned in for the night around 7:30 (that must be the earliest I’ve gone to bed all summer by at least 4 hours). 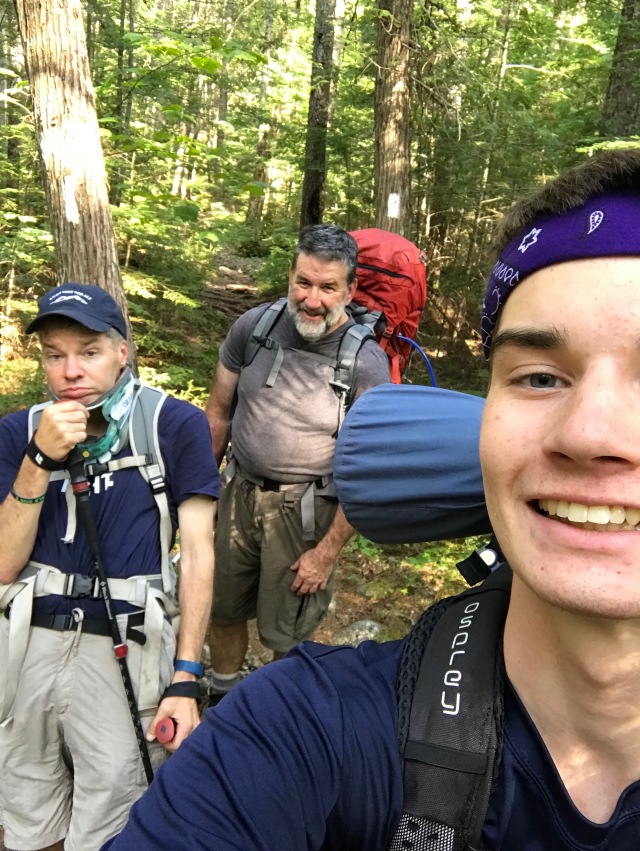 Day 2
Yours truly was easily that last one awake on Day 2. Dad had to yell to wake me up. In fact, Mr. Bell already had his tent packed and was making breakfast when I emerged. This wasn’t a huge waste of time, however, because we had to wait for my mom’s text to leave (don’t ask me how I had cell connection in the middle of the forest in nowheresville ME). I mentioned earlier that my mother is a hero and here’s why. Our contingency plan had been to hike 3.6 miles forward to another logging road where my mom could pick us up. It wasn’t until the night before that we realized that road was an “abandoned logging road.” So my hero of a mother awoke at 5am to drive to the “gate guy” to see if she was allowed on that road. Unfortunately the answer was “No, you can’t get through.” I smell a conspiracy…

Dejected, the three of us were forced to turn back the way we came, as the next exit point was not for 10 miles. Dad was ready to be done with the trail so we couldn’t risk not making it and having to stay the second night on the trail. The silver lining to this decision was that we knew exactly what we were getting into. The Mud Brook proved to be less of a challenge early in the morning and we were making great time. We ran into lots of hikers on the way back. It was awesome to see how excited they were to be nearing Mt. Katahdin, most hoped to finish the AT by summiting on Monday.

Medicine Man was one of two thru-hikers we passed who had met my dad on the trail before. We managed to grab a picture with him, but we met Dr. J on a log bridge with little room to spare. Overall, the trip back was spotless except for one comical blemish.

Dad’s keen eye spotted these little buggers on the side of the trail. As Mr. Bell and I reached for them Dad lost his balance and fell. The two of us were too preoccupied by the blueberries to catch him in time. Of course, being who he is, once we had hoisted Dad up he was ready to hike on again. From then on our exit was smooth sailing and we reached Jo Mary Road just before noon for a clean 24-hour stint on the trail.

I caught my Dad in a totally non-staged wave as he bid a triumphant farewell to the AT for the final time. We’re on to Mt. Katahdin this weekend where the boy scouts and I will be summiting in his name!